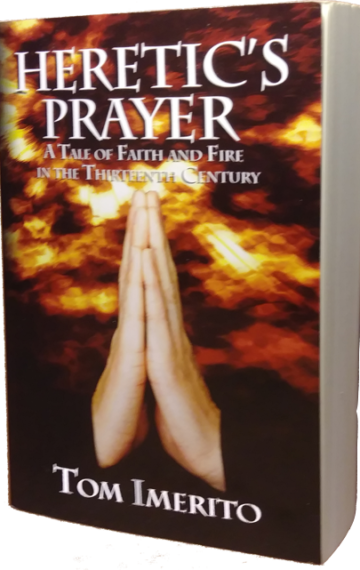 A Tale of Faith and Fire in the Thirteenth Century

In the year 1203, in a remote village on the northern slopes of the French Pyrenees, a young heretic woman named Marie Guillamette attempts to ensure her dying mother’s graceful ascent to Paradise in accordance with the forbidden Cathar sacrament of the Endura – death by ritual starvation.

When a papal legate, charged with abolishing the Cathar heresy, learns of the forbidden rite, he interferes with the burial. In answer to the legate’s act of desecration, Marie and her fellow Cathars wage a war of wits to protect their evolving faith and their imperiled lives from the ravages of the Church of Rome.

Brimming with faith and falseness, prayer and perversity, gluttony and greed, contraceptive devices and abortifacient herbs, forbidden love and mysterious deaths, Heretic’s Prayer is the story of a young woman’s quest for spiritual purity in a time of religious turmoil.